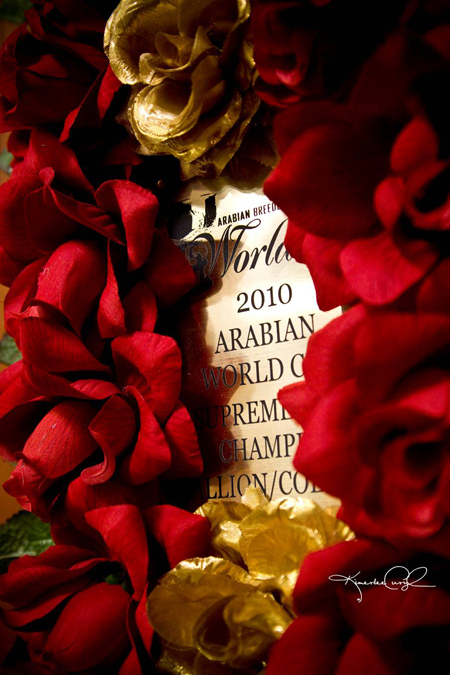 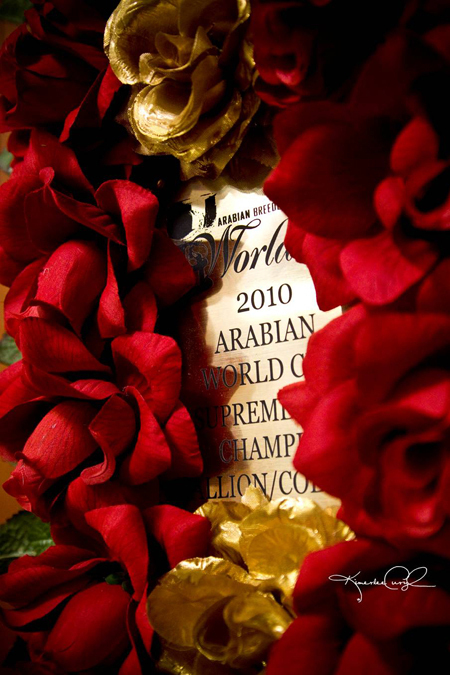 This is not so much one Arabian Moment, but the recollection of one amazing show. The 2010 Arabian Breeders World Cup Show in Las Vegas was beyond comparison for Om El Arab International. Winning the Breeder’s Cup is an incredible honour and winning it for the second time is something we hadn’t dared to dream about. This year’s win was extra special because 2010 is the 40th anniversary of the Om El Arab breeding programme and we couldn’t think of a better way to celebrate that milestone than being honoured with the Breeder’s Cup.

Sigi and I had decided last year that it would be great fun for Om El Arab to showcase several horses at the Vegas show. As luck would have it, Gerard Paty was in our Valley for two months over the winter and had time to help us. We picked out a show string and went to work and ultimately, the horses that went to Vegas were all home-conditioned and trained at Om El Arab.

Thursday’s in Vegas are for the amateur handlers and at Om El Arab, that would be me. The first horse that gets shown seems to set the mood for the duration; I was a little worried because that first horse was Om El Al Azeem (*Al Lahab x Om El Beneera) our fiery, previously unshown four-year-old breeding stallion who we are counting on for the future of our breeding programme. In other words, no pressure! Looking back I shouldn’t have worried as he was amazing! We won that class with a 10 point lead to the second-placed horse and set the pace quite nicely for the rest of the show. We were also named Supreme Champion Amateur Stallion on Sunday morning.

Next I had the pleasure of showing our beautiful, three-year old filly, Om El Excella (*Al Lahab x Om El Bint Shaina). We won the three-to-four-year-old amateur mare class and it was pretty clear that we were on a roll. Om El Excella was crowned the Reserve Champion Amateur Mare on Sunday morning.

On Friday, Bettina MP (WH Justice x Om El Belinda Estopa won the yearling filly class; she is a bouncy, pretty filly that was incredibly born just eight months before the show. She ended up the Bronze Champion Arabian World Cup Yearling Filly in the Supreme Championship on Sunday.

Om El Excella showed on Friday in the three-year-old filly class with Gerard. She was Top Five in that class, but surprised us on Sunday in the Arabian World Cup Junior Mare Supreme Championship by winning the Bronze Champion title.

Om El Beladeena (*Al Lahab x Om El Benedict) turned heads on Friday as well. She had been our best-kept secret and prior to this trip, Beladeena had never been off the farm. Hardly a soul knew about her, but I think she has some fans now; she just trotted into the ring as if she owned it! Beladeena won her class and was Top Ten in the Supreme Mare Championship, placing fourth on the cards.

Although not bred by us, Eagleridge Passionata (*Sanadik El Shaklan x River Oak Dimity) undoubtedly needs to be mentioned here. Bred by Eagleridge Arabians and owned by Ajman Stud,Passionata’s ethereal beauty was rewarded on Friday as she won her class before being named Supreme Champion Mare on the Sunday.

On Friday, Om El Al Azeem was shown by Gerard in the four-year-old stallion class. He trotted into that ring with such power and speed that I was momentarily worried for his handler! They were rewarded for their efforts when Al Azeem won the class and was placed high in the Supreme Stallion Championship as well, winning Top Ten honours, taking fourth on the cards.

I showed Om El Sophine (Om El Exquisit x Om El Sophie Dream) in the AHBA Futurity Yearling Filly class on Saturday afternoon. Sophine is a huge yearling filly with type and a lot of motion. It was also her first show and the first time in the ring, so I was very proud of her and extremely excited when we heard that we were in a three-way tie for first place. We ended up third in that tie breaker, but winning Top Five honours in that competition was just wonderful.

Om El Babylon (Om El Shahmaan x Om El Bandeira) owned by Glenn and Kathy Garrett, trotted into the five-year-old stallion class like a freight train. At 16.1hh, Babylon is all horse and his refined face is just beautiful. In my opinion he was one of the best movers of the show and he was amazing. He took the reserve spot in his class and was also named Top Ten in the Supreme Stallion Championship.

The above is not meant to be a list of what Om El Arab did in Vegas this year, but it all leads up to the highlight, my Arabian Moment. For the highlight of these incredible four days came on Sunday afternoon during the Supreme Stallion Championship. The announcer called out the top four breeders of the show and we were asked to join the others in centre ring, where were each awarded finalist plaques. What we didn’t realise was that Om El Babylon and Om El Al Azeem were quietly brought to each side of our group of breeders as they announced that Om El Arab International had won the Breeders’ Cup. It was incredibly special to be flanked by our two stallions during this monumental moment. To win the coveted Breeders Cup in the year of Om El Arab’s 40th anniversary was especially meaningful to us. It was a wonderful reward for the many years of passion, hard work and dedication that are essential to the success of a breeder, no matter how small your beginnings.