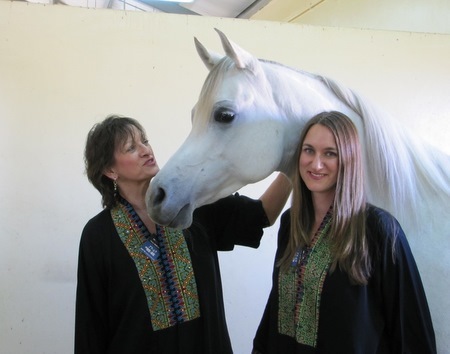 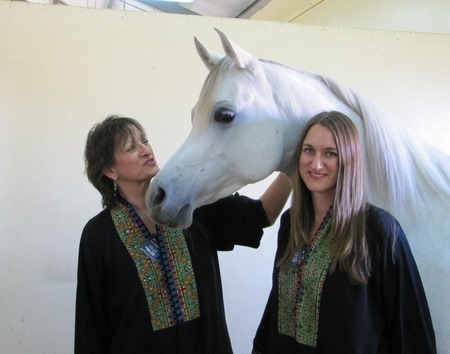 In late January Sigi and I travelled to the Kingdom of Saudi Arabia for the 4th annual Al Khalediah International Show. My expectations before embarking on this trip where not terribly high, to be quite honest I wasn’t too thrilled to be going. I had lots of work to do at home with the Scottsdale show just around the corner. I also felt that as a woman I wouldn’t really be able to experience much of Saudi Arabia. What I learned is that having no expectations can be a good thing at times because I was totally taken by surprise by how much I enjoyed this trip.

Sigi and I were greeted upon arriving at the airport in Riyadh by Guest Services of the Al Khalediah Festival. We were immediately given our Abayas, which we put on and never really took off for the rest of the trip. We had given our measurements to the show organizer a while back and they had the Abayas custom tailored for us and every foreign guest. They were all black but many of them had beautiful, colorful embroidery and beads on them. We were also given a headscarf that matched each Abaya. It was the oddest feeling at first to walk around covered up from head to toe. I soon got used to it, however, and enjoyed the loose comfy clothes I had on underneath! I have to admit that I’ve never packed for a trip abroad as quickly as I did for this one.

We stayed at the official hotel for the show, the Radisson Blue, and soon met up with friends from all corners of the world. We women complemented each other on our different Abayas and took the opportunity to take many photographs.

Our first day there was Arabian race day. The Al Khalediah farm is about an hour by car or an hour and half by bus away from Riyadh. That afternoon we all piled into the bus and headed out to the farm to watch the races. Al Khalediah is owned by HRH Prince Khaled bin Sultan bin Abdul Aziz Al Saud. The farm is a paradise built in the middle of the desert. The race track is state of the art with an incredible viewing area for the royals and other spectators. We found ourselves in the royal area and were spoiled all evening with tea, coffee and hors d’oeuvres that seemed to circulate endlessly. It was quite a special evening.

The next day the International Horse Show began in another area of the farm. Prince Khaled built a show arena with incredible viewing areas specifically for this event. We sat in a VIP area on one side of the show arena and the royals were directly opposite us in their slightly grander viewing area. To the left of us was a grandstand for local people and to the right of us another fancy area. I never figured out who was allowed to sit there and why but it didn’t include us. We each had our designated tables decorated with trays of handmade chocolates and again waiters circulated endlessly with cardamom coffee, black sweet tea, wonderful fruit juices, pastries, cakes and every other hors d’oeuvres you can imagine. The “coffee guys” would swarm in as a team with their little cups and Arabic kettles filled with cardamom coffee dozens of times every day. They seemed so disappointed when we would wave them away that I drank more than my fair share just because it made them happy. The first day of the show consisted of just four junior classes but the show managed to take nine hours with the coffee breaks, the prayer breaks, the yummy lunch break held in a traditional tent out back, and whatever other break. It was a true spectacle!

Sigi and I were lucky to have our good friend, Mohammad, who lives in Saudi Arabia show us around. Through him we met many people and experienced some things that were not on the agenda for everyone else. We had the opportunity to spend an evening in a classic Bedouin tent eating traditional food and making new friends. It was an honor to be invited. We spent another evening at a traditional Arabic restaurant. We sat on the ground on exotic cushions and chatted with each other while the meal was laid out in the middle of the room in two long rows on the floor. The food was fabulous and so was the company. Again it was an honor to have been invited.

The highlight of our trip for me was visiting the two beautiful Om El Arab mares that live at Al Khalediah. We visited Om El Bernadette (Om El Shahmaan x Om El Benedict) first. She recognized us instantly and we spent a long time kissing, hugging and shedding some happy tears. Bernadette looked happy and is in wonderful show shape. She was Egyptian National Champion Mare last fall. She will be competing on the international show scene again this year. Our second reunion, with Om El Shadina (*Sanadik El Shaklan x Om El Shaina) was harder and more emotional. Shadina left our farm as a mature mare and it is always bittersweet to see the horses with which we’ve had a strong bond again. She also seemed so happy to see us. It is with a heavy heart that I recall our time spent with her.

The championship classes were very interesting. I have to say that in my opinion the six international judges did an excellent job. The championship classes were full of outstanding individuals. The Om El Arab influence was evident in several horses. The Junior Champion colts were ranked in the following order: Gold Champion was Kahil Al Shaqab by Marwan Al Shaqab, Silver Champion was AJ Fenjan by Ajman Moniscione, who carries *El Shaklan blood through his paternal grandmother and Bronze Champion was Aja Adonis by WH Justice and out of a *Sanadik El Shaklan daughter bred by Doug Dahmen.

The beautiful Champion Mare, Panarea by Palawan, owned by Ajman Stud, is by Justice who is out of an *El Shaklan granddaughter. Venetzia, the beautiful chestnut mare who is double *El Shaklan through a full brother/sister pairing of Versace to his full sister, was Silver Champion Mare. Bronze Champion was the lovely Laheeb daughter, Badawieh.

Sig and I were very proud of the Senior Gold Champion Stallion LVA Maximus who’s pedigree we’ve influenced a lot. He is by the stallion Espano Estopa whose sire and dam where both bred by Om El Arab and out of a mare named Challon Salana. We sold her dam, Bur Sable to England many years ago. Challon Salana’s sire is *Carmargue who we had on lease at our farm for two years. The Silver Champion Stallion Was Bashir Al Shaqab by Marwan Al Shaqab. The Bronze Champion was Eternety Ibn Navarrone-D who is also an Om El Arab relative through his famous mother Navarrone P.

It is such a joy for us to go to horse shows around the world and to see the influence of our great, big “family”. Any horse that has some Om El Arab blood in it we consider family and it makes us so proud to see them succeed.

I’ve completely revised my opinion on travelling to the Kingdom of Saudi Arabia. It was an adventure that I would not have missed for the world, everyone we met was kind, they were proud of their horses and were excited to meet like-minded people that enjoyed their same passion-the Arabian Horse. I look forward to going back for another visit soon.