The world of Arabian horses has lost one the most reliable and consistent sources of world class type and quality. Om El Arab International has lost the stallion that embodied all of its breeding goals: exotic type, balance and strength, correctness of structure, athleticism, and a kind and willing personality. *Sanadik El Shaklan passed away on August 24, 2008. He was twenty-five, but neither he nor anyone who visited him at his home at Om El Arab International, would have guessed it. At the time of his passing *Sanadik was arguably the most successful living sire of national, international and world champions. That was title he earned all by himself, one champion foal at a time.

It can be a mixed blessing to be the son of famous parentage. At the time of *Sanadik’s birth in 1983, his sire *El Shaklan was only seven, and was one of the most celebrated and talked about international sires in the world. Many breeders around the world proclaimed that *El Shaklan was single-handedly shaping and inspiring the modern look of the Arabian horse. *El Shaklan was the headliner for the Om El Arab breeding program.

In 1986, through tragic circumstances, *El Shaklan was sold to a breeder in South America. The Om El Arab breeding program was left without a great stallion to carry on the breeding program and the main attraction to bring visitors to the farm. 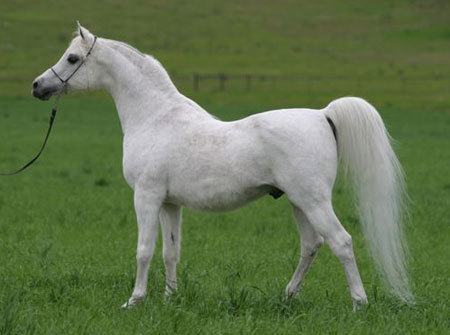 Though there were many mature and successful sons of *El Shaklan available, Om El Arab International placed all their hopes and dreams for their future on an exotic but relatively unknown grey four-year-old stallion. In 1987 *Sanadik El Shaklan moved into the big empty stall that had once housed *El Shaklan. *Sanadik was tall and exotic like his sire, but he was more finely made and very elegant. Like his sire, Sanadik’s pedigree was an equal blend of Egyptian and Spanish bloodlines: the Golden Cross.

A procession of champion-winning get sired by *Sanadik soon followed suit. One was Om El Sanadiva, who became World Junior Champion Female, and reins over her own dynasty today as one of Germany’s most successful producers of champions. More recently *El Dorada, born in Poland via frozen semen, earned the coveted titles of Polish National Champion Mare and U.S. National Champion Senior Mare. Today *Sanadik has a long list of national champions sired around the world. The countries include England, Spain, Germany, France, Belgium, Sweden, Finland, Poland, Australia, Chile, the Czech Republic, and the U.S.

*Sanadik more than filled the shoes of his illustrious sire. He became the headliner who attracted visitors from all over the world. *Sanadik lifted the Om El Arab program to a new and higher dimension. His achievements as a sire of international champions not only eclipsed those of his sire, but any other sire of his time. 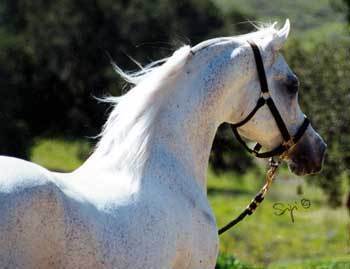 The enduring qualities about *Sanadik for those who knew him was not his abilities as a sire, it was his charming easy character and affectionate personality. But at times, *Sanadik could be all macho. When we would show the stallions to visitors we would start with the youngest and end with *Sanadik, our oldest. We bring the stallions into the mare barn so that they can show off their qualities and personalities themselves. The young stallions would parade into the barn arching and strutting. The visitors admired them. Then it was *Sanadik’s turn. He knew we saved the best for last. As he walked to the mare barn he grew tall and grand and commanding, neck arching and tail carried high and proud. In a nicker powerful and deep he talked to the mares in a way that proclaimed I am King. His regal presence and extraordinary type brought tears to visitor’s eyes. Yet *Sanadik was truly sweet, kind and affectionate. He loved interacting with all people. He would stop eating and walk over for a scratch or nuzzle. He loved carrots more that anything. In his younger years *Sanadik would spend hours on frequent journeys into the mountains around the farm. He was sure-footed, nimble and powerful as he climbed the narrow steep trails or crossed rocky creek beds.

Forever we will miss the time shared on rides into the mountains.

Happily, in many ways *Sanadik will live on forever at Om El Arab International. The great stall that first occupied his sire, *El Shaklan, and then was home for twenty years for *Sanadik El Shaklan, is not empty. It is now the home of his son, Om El Shahmaan, who is carrying on the Shaklan legacy. And like *Sanadik, Shahmaan has big shoes to fill, to carry the breeding program to a new and higher dimension. True to his illustrious heritage, it looks like he will. In the stall next to Shahmaan is his very special son, Om El Bellissimo.

Thank you *Sanadik for being all that you were. Enjoy that deep green grass until we meet again...

We at Om El Arab International have been profoundly touched by the many breeders and admirers of *Sanadik El Shaklan around the world who have sent e-mails expressing how he has affected their lives. Here is one such e-mail:

Though I never saw the horse in person, I thought that you would like to know that, for the past year or so, I have had his picture on my refrigerator door so that I could see it every day. I believe you had sent it to me when I inquired about your horses. I have never seen a more perfect Arabian anywhere, of any bloodline, and his face was truly angelic. I am an Anglican priest, Vicar at St. Michael and All Angels, which is located at my horse farm, Reveillon Lodge Arabians, near Raymond, Mississippi. What a marvelous thought that I will meet him in Heaven – I firmly believe that the Lord has a special place for his beloved animals there, too – certainly for Arabian horses. Truly, *Sanadik was and still is the ideal of his breed! 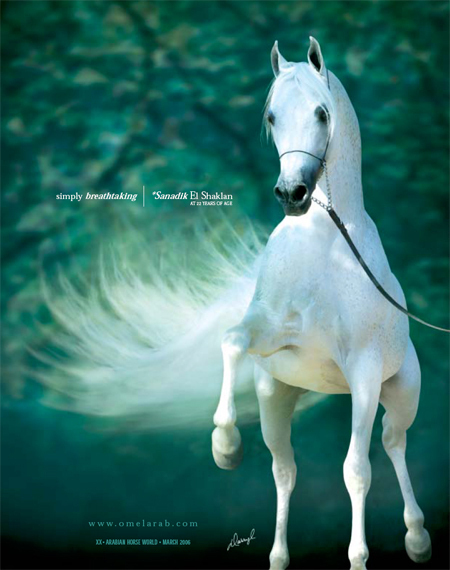 *Sanadik is clearly the heir to the *Estopa Family dynasty. *Sanadik is regarded among international breeders as being one of the world’s most influential sires. His get have won many World, International and National Championships and now his grand-get are winning the same prestigious titles in both halter and performance.

For many, *Sanadik is the epitome of the classic Arabian stallion. *Sanadik was blessed with a harmonious marriage of function and beauty. He is exotic in type yet structurally correct and athletic. *Sanadik is extremely fertile and his semen is of extremely high quality. We ship his semen chilled or frozen across the country and around the world with extraordinary success. International breeders are being blessed with gorgeous, healthy foals in Poland, Finland, Denmark, Holland, Germany, Austria, Australia, and South Africa.

Please see some of his most decorated get below:

Wishing you a blessed holiday season from our family to yours!